I was going to watch a movie tonight, but Netflix is letting me down in a big way. I spent about 20 minutes scrolling through several pages of masterpieces such as Kazaam, House Party 3, something called “Transmorphers”, and this:

As far as I can tell, it’s a movie about Frank the dog from Men in Black being adopted by a suburban family and becoming their best friend. I’m sure that’s not what it’s really about, but I’m also sure that I don’t want to watch it either way.

So instead, I’m going to write about my first week since having surgery last Friday. Three themes dominated my first week, especially the first 72 hours following surgery. Those three themes are as follows: Percocet, sleep, and constipation. Needless to say, it was not even close to being the greatest weekend of my life. Basically, my first three days after surgery consisted of me taking Percocet, sleeping for 4-5 hours, waking up, taking more Percocet, and falling back asleep, thus restarting the cycle. I was like a Percocet-powered snooze machine. Every once in a while I would stay awake long enough to gobble down some fruit salad or grilled cheese or whatever, but I tried to stay asleep most of the time to avoid being in pain.

I was content to stay on the recliner all day sawing logs and scarfing down foodstuffs, but what I didn’t realize was that the Percocet and my beloved grilled cheese sandwiches were hanging out in my stomach and plotting to make my life an absolute fucking misery. As it turns out, one of the side effects of Percocet is the kind of crippling constipation that makes people blow blood vessels in their eyeballs while trying to force out a turd the size of a small dog’s head. 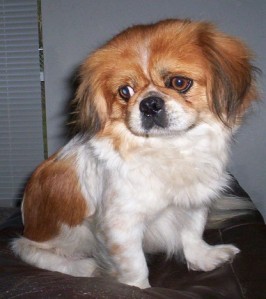 Not as cute when it's lodged in your colon

Add to that the fact that i had to sit on the toilet with my right leg locked at 0° flexion and elevated on a stool (kind of a pun, I guess), and you have all the ingredients for a thoroughly terrible bathroom experience.

Speaking of terrible bathroom experiences, I took my first brace-less shower today. I wasn’t allowed to take the brace off for the first 7 days, but my doctor told me yesterday that I could start removing it to take showers. He also reminded me to “just pat the leg dry” after the shower. Apparently, he thinks I might somehow forget that I just had surgery, give myself an overly vigorous rubdown, and tear open all my incisions. Anyway, I stepped into the shower and went through the whole rigamarole of getting undressed (taking off socks is harder than you think), taking off the brace, unwrapping my knee, and sitting down in the special shower chair. I then tossed all my stuff away from the shower so that I wouldn’t trip over it on my way from the shower to the tile floor. That’s when I realized that I’d made a mistake; the water would be freezing cold for at least 30 seconds right after I turned it on, and I was sitting in a chair directly underneath the showerhead with no way to avoid it. I did the classic palm-to-forehead slap move, then sat there for a few seconds cursing my knee. Ultimately, I was forced to turn on the water and then sit there in my shower chair and just take it in the face, wearing nothing but an agitated frown. Fortunately, I did manage to make it out of the shower without slipping and braining myself on the toilet seat, so I guess it wasn’t as bad as it could have been.

As for as the rest of the week, it’s mostly consisted of me stalking my friends on Facebook and “surfing the web” as the kids would say if it were 1998. My crowning achievement of the week was walking without crutches for the first time today. Yippee for me, I guess. I start physical therapy on Tuesday so hopefully I’ll start regaining some good old ROM (range of motion) and see if I can do something about my current toilet stance, which I would currently rate as “less than ideal.”

I'm a 27-year-old former college baseball player, currently working as a strength and conditioning coach in Baltimore, MD.
View all posts by Andrew Sacks →
This entry was posted in Knee injury, Me and tagged ACL, PCL, recovery, surgery. Bookmark the permalink.